Hyderabad marked the territory in which people turned from being friendly into obnoxious and in your face. The famous fort was not enough to live down the intrusive nature of the photographs that we found pressed upon us every 5 min. The deep Muslim nature of the city’s unsettled me somewhat after the relaxed Hindu southern approaches we’d just come from. We toyed around in an amusement park and saw our first (of two) Indian films – culture passage in its own right. The “Tellgu” film was beautiful if somewhat banal and fantastical at the same time in so far as it painted India so far cleaner picture than anything we come to see so far. We endulged a famous biryani which was actually disappointingly tame and paled in comparison to a biryani which I had at Rishikesh in a later adventure. Hyderabad marked a somewhat unpleasant departure towards northern climes after the pleasantries and honest civilities of the south.

Adam and the scale of the Golkonda fort

Temple goers at the top of Golkonda fort 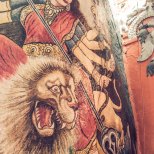 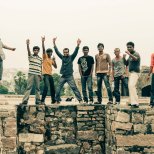 A gang of young indian men: ready to assault for photos on their cameraphones

A view of the military training grounds at Hyderabad 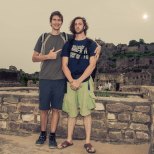 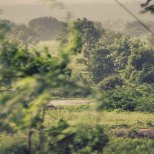 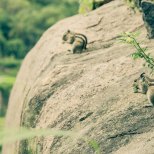 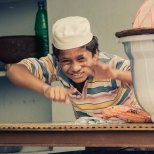 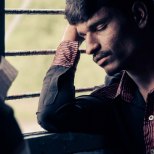 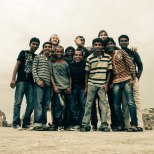